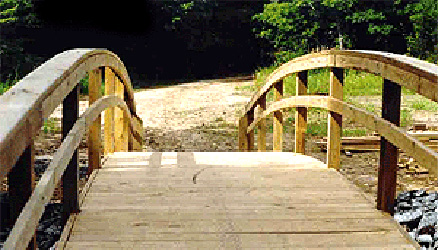 The Middlebrook trail, located mostly in Bridgewater, NJ. The site is home to many fantastic plants and animals, but the biggest contributions which have made the trail increase in popularity are the many projects done by Eagle Scouts and other contributors. Without the help of eagle scouts and volunteers, including building bridges, boardwalks, and stairs on steep hills, the trail would not be what it is today

History
This trail system was prompted by the installation of sanitary sewers in Washington Valley in the 1980’s. Knowing that the availability of sanitary sewer would prompt a wave of residential development, Bridgewater Township created the concept of acquiring parklands along the Middle Brook by allowing cluster subdivisions which allow smaller lot sizes in return for a dedication of open space at no cost to the town. In 1987, the first piece of open space was acquired in this manner. The park was formed from properties acquired from other cluster subdivisions &, and acquisitions paid for with Open Space funds.

The Middlebrook Encampment & the Revolutionary War
The Watchung Mountains, known to Washington as the Blue Hills, were a natural barrier behind which the Continental Army was safe from incursions by the British out of Manhattan and at the same time a menace to British security. Washington with his main army sought the shelter of these hills for three winter encampments, two at Morristown and one at Middlebrook.

Bound Brook Village and the surrounding countryside frequently were targets of British soldiers during their encampment at New Brunswick in 1777. On April 13, 4,000 British and Hessian troops under General Charles Cornwallis marched out from New Brunswick in four columns to surprise the American garrisons guarding Raritan River crossings. Completely overpowered, some fled, others were taken prisoner, and the Battle of Bound Brook was over. 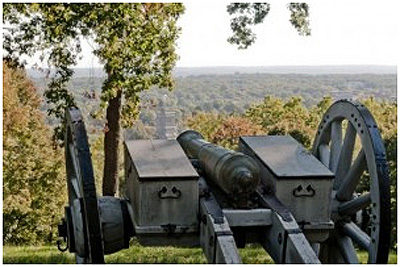 Washington moved the army from its Morristown Winter encampment to the area between the first and second range of the Watchung Mountains, in June 1777.  He returned in the winter of 1778-1779 with an army of 10,000, equal to the population of Somerset County, to camp near the village of Middlebrook. To minimize impact on residents, brigades were assigned to locations several miles apart: Maryland to the east of Middle Brook, Virginia on the west, Pennsylvania across the Raritan, on the west side of the Millstone River, and the artillery at Pluckemin. The six-month Second Middlebrook encampment takes its name from Washington’s “Middlebrook” dating of his dispatches; that 18th century village no longer exists, having become the western end of Bound Brook.

At two different times during the Revolutionary war (spring 1777 & winter 1778 to spring 1789) the Continental Army had encampments in this area. They made good use of strategic locations on the First Watchung Mountain from which George Washington and his troops were able to see for miles over the plains east towards New Brunswick and to the south. Had the British attacked, they would have to contend with the steep side while the Americans defended the few gaps. The gaps still control the roads crossing into the valley (Vosseller, Chimney Rock, Steele Gap, & Brown). Camp Middlebrook is located near the eastern end of the trail.

It was in the Middlebrook where on June 14, 1777 the first flag with 13 stars in a blue field and 13 alternate red and white stripes which was authorized by the 2nd Continental congress, first flew. The Washington Camp Ground Association holds a ceremony at the site on Middlebrook Road each July 4. 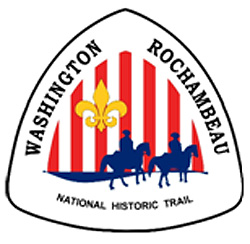 Rochambeau’s Route to Yorktown
Did you know that in August of 1781 about 5,500 French Troops who marched from Newport RI marched through Bridgewater on their way to defeat the British at the Battle of Yorktown?

The American armies had taken different routes through New Jersey, not far from each other, through Chatham, Springfield, and Scotch Plains. On August 29th, Rochambeau’s force arrived at Bullion’s Tavern in Liberty Corner where they set up camp for the night, and the next morning, August 30th, they began the march through Bridgewater to Somerset Courthouse (now Millstone, New Jersey) and from there onto Yorktown for the last decisive victory of the American Revolution. Portions of the Middlebrook Trail east of Tullo Rd. follow the exact route taken by Rochambeau.

The Reservoir that Nearly Was
In 1955 the New Jersey Water Commission was considering the recommendation from a consulting engineering study to create a reservoir by building a dam across the Middle Brook in the gap of the First Watchung Mountain at Chimney Rock Road. Water would be pumped into the reservoir from the Millstone and Raritan Rivers. It would have flooded Washington Valley nearly to Mount Vernon Road. It was not supported by he the Bridgewater residents and the fight spread statewide. The issue was made a referendum question on a state wide election. In the end the referendum was defeated and Round Valley Reservoir in Clinton Township was built instead.

Construction
The Bridgewater Township portion of the Middle Brook Trail was constructed largely by volunteers most of whom were either boy scouts or girl scouts. The first Eagle Scout project was completed in 1995. By 2012, there were 87 Eagle Scout projects completed on the Middle Brook Trail as well as other volunteer and scout projects. The strength of the scouts’ commitment has led to a tradition of scouts volunteering for other projects with the town. The scouts have constructed about 3.5 miles of trail, including almost half a mile of boardwalk, over 900 feet of bridge, and many other improvements.

We are thankful to all who have volunteered in the past and look forward to additional volunteers in the future. The strong involvement of volunteers has endeared the trail and provides enjoyment for a many people. 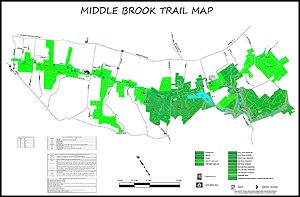